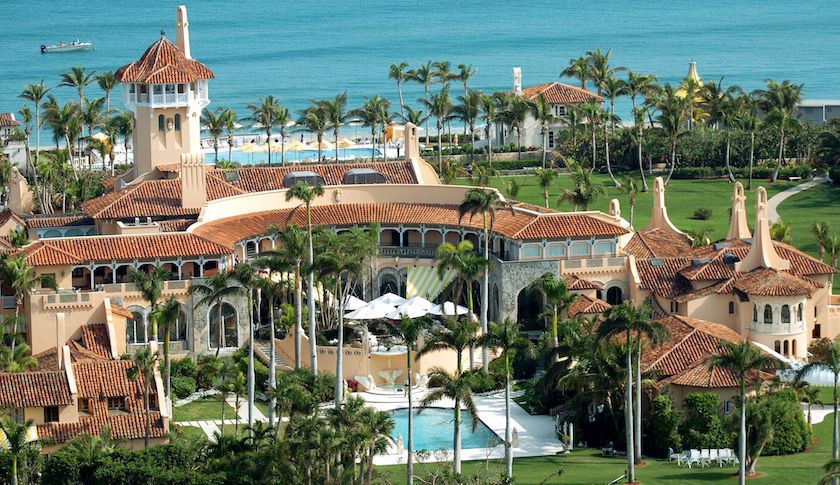 It's a destination that is quite often in the news. The Donald Trump Mar-a-Lago property has become this 45th president's primary getaway home (with nearby Trump International Golf Club) outside of the White House in lieu of what would otherwise be a more spartan Camp David retreat that has served as the default relaxation spot for the majority of U.S. presidents.

Often referred to as Trump's "Winter White House" due to its year round warm weather location in Palm Beach, Florida, President Donald Trump, the 45th President of the United States maintains the Mar-a-Lago property as both a family compound and commercial luxury resort. Mar-a-Lago, a National Historic Landmark, was completed in 1927 by socialite Marjorie Merriweather Post (the cereal heiress who passed away in 1973) who once bequeathed it to the National Park Service (though it was returned due to costly upkeep), for the intention of being used for state visits or as a Winter White House.

Mar-a-Lago was purchased by Donald Trump in 1985 and the Trump family has since maintained private quarters in a separate, closed-off area of the expansive mansion and grounds from the rest of the member-guest quarters. As the 45th President of the United States, Trump uses the location along with the nearby Trump International Golf Club (West Palm Beach) in lieu of Camp David. Donald Trump has referred to Mar-a-Lago as his "Winter White House" and alternately the "Southern White House."

Since Donald Trump became President the initiation membership fee for joining Mar-a-Lago jumped to $200,000, double the price before Trump's election in November 2016, and that doesn't include the $14,000 yearly dues, or the annual food and beverage minimum.

The first governmental spending on property improvements of private presidential residences was at Dwight Eisenhower's Gettysburg farm, where the Secret Service added three guard posts to a fence. Federal law now allows the president to designate a residence outside of the White House as his temporary offices so that federal money can be used to provide required facilities.

The luxury features and/or amenities offered by Mar-a-Lago can be viewed as distinct categories consisting of the spa, transportation service, sports recreation including golf, dining, and living quarters.

You can expect to find these features and luxury amenities at the Mar-a-Lago Estate outlined in this summarized listing:

Please contact the concierge for current and accurate Mar-a-Lago room and membership rate information and details.

Trump International Golf Club, West Palm Beach is close by to the Mar-a-Lago resort. It carries a Five-Star Diamond Award from the American Academy of Hospitality Sciences. The 27-hole golf course was designed by architect, Jim Fazio. Opened in 1999, the West Palm Beach location was the first Trump golf course property and it has hosted championships for the LPGA. Other Trump Golf properties throughout the world include:

Please contact the administration for current rate and membership information and details.

List of residences of Presidents of the United States (Wikipedia, the free encyclopedia)
https://en.wikipedia.org/wiki/List_of_residences_of_Presidents_of_the_United_States