As of 2017, viewers can access live UFC fights and fight replays on their subscription network UFC Fight Pass. You can find below this paragraph some of the more popular and intriguing UFC fight profiles that are searched for, along with vital statistics and Facebook and/or website links for the consumed MMA fan to connect to. Below the profiles you will then come across RSS calendar, event and news information feeds that should deliver data on UFC fight nights and fight cards.

Conor Anthony McGregor (aka The Notorious) 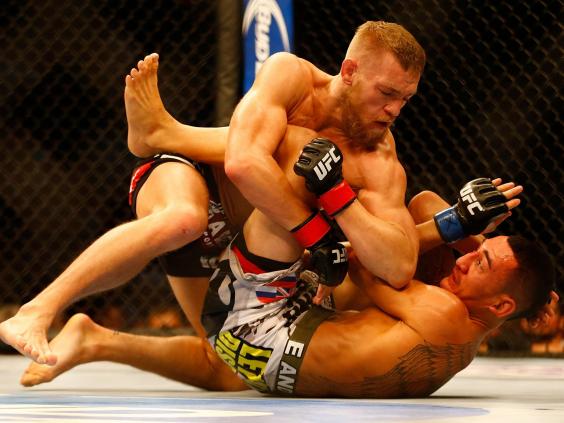 Remarks: Conor McGregor's professional career began in 2007 with an amateur fight after which he immediately turned professional and made his professional MMA debut in 2008. Although he suffered two loses via submission in his early career, he then made an impressive comeback and became the Cage Warriors featherweight and lightweight champion. Witnessing his performances, the Ultimate Fighting Championship (UFC) signed McGregor in early 2013. He won his first UFC fight against Marcus Brimage via TKO.
McGregor’s impressive rise in the UFC took place in a little over two years. The Irishman from Dublin burst into mixed martial arts superstardom with a 13-second drubbing of UFC featherweight (145 pounds) champion Jose Aldo in December 2015. McGregor is known primarily as a striker, with the vast majority of his victories coming standing up rather than down on the ground. He fights out of the southpaw stance, but frequently switches to a conventional stance.
Before the Floyd Mayweather fight, Conor McGregor headlined two of the three best-selling UFC fights ever on pay-per-view. UFC 202 where McGregor defeated Nate Diaz had a record 1.6 million buys. Three months later McGregor beat Eddie Alvarez at UFC 205 in a card with 1.3 million buys (McGregor also starred in the second and fifth best-selling fights of all-time). The two bouts in the second half of 2016 earned McGregor $27 million, including his cut of PPV receipts.
Website: http://conormcgregor.com/
Facebook: https://www.facebook.com/thenotoriousmma/
Twitter: https://twitter.com/TheNotoriousMMA
Instagram: https://www.instagram.com/thenotoriousmma/

Brock Lesnar (aka "The Beast Incarnate") 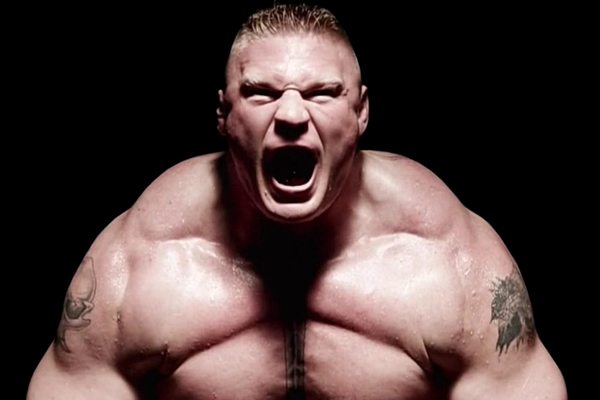 Remarks: A 2000 NCAA Division I National Champion in wrestling and later entered WWE and New Japan Pro Wrestling (NJPW) professional wrestling. Was named a defensive tackle for the Minnesota Vikings, was cut prior to the start of the 2004–2005 season but received an invitation to play as a representative for the Vikings in NFL Europa which he declined.
Website: http://www.wwe.com/superstars/brock-lesnar
Facebook: https://www.facebook.com/thebrocklesnar 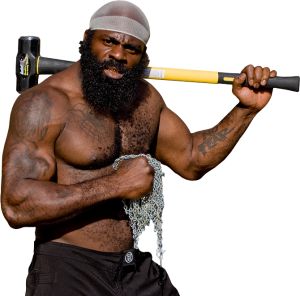 Watch the video of Kimbo Slice vs. Ray Mercer

REMARKS: Kimbo Slice, born in Nassau, Bahamas, was a part of an unsanctioned street fighting circuit before his MMA career started: all striking, no grappling. In 1997, he had a tryout with the Miami Dolphins and was part of the pre-season squad but was unable to secure a spot on the first team. Has a fighting style mixing Boxing, Kickboxing, Muay Thai, Shoot fighting, Judo, Brawling. Kimbo Slice expired June 6, 2016 of heart failure, after a mass on his liver was also diagnosed. The website actively works as a memorial trust fund to benefit the children of Kimbo Slice that are left behind.
Website: http://www.kimbo305.com/
Facebook: https://www.facebook.com/Kimbo-Slice-49303644043/

Fedor Emelianenko (aka "The Last Emperor") 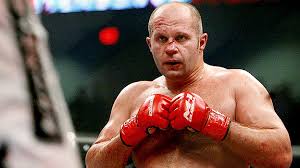 Vitor Belfort (aka "The Phenom") 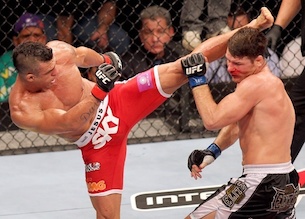 REMARKS: With a black belt in Brazilian jiu-jitsu, Vitor Belfort approaches MMA through a range of boxing, submission grappling, striking and Brazilian jiu-jitsu. He studied jiu-jitsu with Carlson Gracie, a founder of the Gracie Jiu Jitsu variant of Brazilian Jiu Jitsu with his uncle Hélio Gracie, A former UFC Light Heavyweight Champion as well as UFC 12 Heavyweight Tournament Champion. On April 11, 2006, Vitor fought in his first professional boxing match against Josemario Neves which he won by TKO.
Website: http://vitorbelfort.com/
Facebook: https://www.facebook.com/pages/Vitor-Belfort/104069936294695 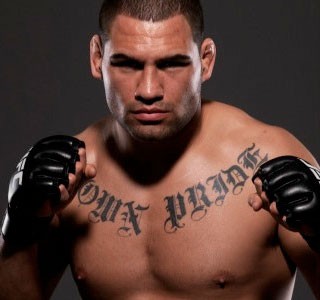 REMARKS: Cain Velasquez, the first Mexican-American to win a major professional heavyweight title in MMA or boxing history, attained his Jiu-Jitsu black belt in October 2013. Velasquez has a fighting style that spans Kickboxing, Wrestling, Brazilian jiu-jitsu, Boxing, Muay Thai. Cain Velasquez is well regarded for his cardiovascular training giving him the endurance that enables continuous and aggressive fighting well after his opponents have become exhausted. It has earned him the nickname 'Cardio Cain.' Velasquez's strong 'cardio' also allows him to throw more strikes, and up to July 2013 he was ranked number one for the most 'Strikes Landed per Minute' in the UFC.
Website: http://cainvelasquez.com/
Facebook: https://www.facebook.com/officialcainvelasquez/

Anderson Silva (aka "The Spider") 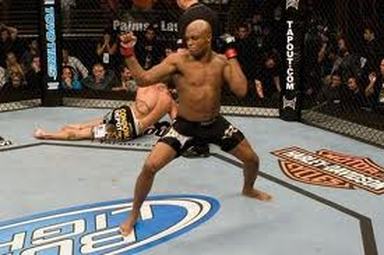 REMARKS: Growing up financially pressed, Anderson Silva's family was unable to afford expensive lessons in Brazilian Jiu Jitsu early on. Eventually, Silva's family found the money to pay for Tae Kwon Do lessons at age 12, from which he then moved onto Capoeira before focusing on Muay Thai by the age of 16. A former UFC Middleweight Champion, MECA Champion, Cage Rage Champion, with victories in Pride, Shooto, and Minotauro Fight. A Brazilian Jiu-Jitsu black belt. Worked as an office clerk and at McDonald's before fighting career took off. Film acting career on the side.
Website: http://www.spidersilva.com/
Facebook: https://www.facebook.com/spideranderson/ 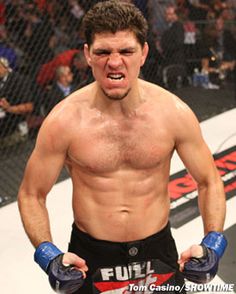 REMARKS: Nick Diaz is a Brazilian jiu-jitsu black belt (3rd Degree Black Belt) under Cesar Gracie whom he has been training with since he was a teenager. He is accomplished in both gi and no-gi jiu-jitsu. He is also a professional boxer, having made his professional debut in April 2005 against Alfonso Rocha, and fights in the Super Middleweight weight class. Nick Diaz is the older brother of Nate Diaz, who has competed in World Extreme Cagefighting, Strikeforce, and Pancrase. Both Diaz brothers are advocates for cannabis. Competes in triathlons for recreation, but which is also thought to aid his overall mental and physical conditioning.
Website: http://nickdiaz.net/
Facebook: https://www.facebook.com/OfficialNickDiaz209 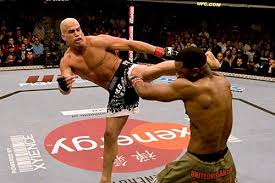 REMARKS: Tito Ortiz brings long-term wrestling skills and ground and pound, along with Brazilian Jiu-Jitsu and submission skills. Ortiz had a difficult childhood as both of his parents were addicted to heroin, while Ortiz was involved with street gangs, eventually being placed in juvenile halls. Despite this, he managed to wrestle for Golden West JC where he was a California junior college state champion and All-American two consecutive years, then onto California State University at Bakersfield, where he also wrestled but not as a full-time starter. Ortiz is the CEO of the Punishment Athletics MMA equipment and clothing line. He also owns an MMA training gym called Punishment Training Center of Huntington Beach, California. Has twin sons with former adult film star Jenna Jameson.
Website: http://www.titoortiz.com/
Facebook: https://www.facebook.com/titoortizhbbb