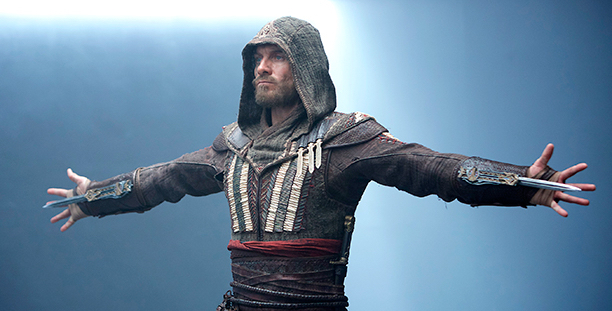 Video game franchise Assassin's Creed has done well for itself in the lucrative games market, placing 14th on Fandom Games Community, Video Games Sales Wiki listing and selling over 93 million copies as of June 2015 (Wikipedia: Assassin's Creed), becoming French multinational video game publisher Ubisoft's best-selling franchise. It might very well be a worthy bet that an adaptation of any other popular gaming franchise has had as unusual a path forward as Assassin's Creed, as it has iterated and transformed itself through various media incarnations (film, television, comics, novels, encyclopedia, video game), and now finally into a feature film directed by Justin Kurzel, written by Michael Lesslie, Adam Cooper and Bill Collage, and starring Michael Fassbender, Marion Cotillard, Jeremy Irons, Brendan Gleeson and Michael K. Williams.
The Assassin's Creed franchise is conceived of a series of stories, each set in a different time period and location or set of locations. The announced motion picture film (there have been some shorter films) will be set in the same universe as the video games but features an original story that expands the series' mythology. A central thematic clause stemming from its literary roots, “Nothing is true, everything is permitted,” serves as a guiding principle that moves the story through its sequences. A connector through the web of the stories is the search for and retrieval of artifacts known as the "Pieces of Eden," that hold great power to control mankind and alter its fate. It will be distributed by 20th Century Fox. After all, this is a series that took inspiration from a novel titled, 'Alamut' penned by a little-known Slovenian writer (his sole novel), Vladimir Bartol, while drawing on some concepts from the 'Prince of Persia' game series, developed in part by Ubisoft.

The short film, 'Assassin's Creed Lineage,' is the prequel to the 'Assassin's Creed II' story, revealing the workings of 15th century Italy through the actions of Master Assassin, Ezio Auditore da Firenze's father, Giovanni Auditore. Episode # 1: 1476, Florence. Giovanni Auditore, an assassin, attempts to prevent a conspiracy, implicating Italy's most powerful families reaching all the way back to the Vatican, against an ally of Lorenzo de Medicis. His pursuit will take him to Milan where he tries to prevent plot from happening as he himself becomes drawn in and hunted.

In the novel by Bartol that served as the inspiration, 'Alamut' takes place in the 11th Century at the fortress of Alamut in the region of what was then known as Persia and now Iran. The fortress was seized by the leader of the Ismailis, Hassan-ibn Sabbah who is training a small but elite army for the purpose of attacking the Seljuk Empire which has claimed occupation of the greater region. Sabbah devises a plan to conquer the region with a handful elite fighters that are referred to as his "living daggers." To develop their vicious skills and their allegiance, he creates a paradise at Alamut, filled with beautiful women, lush gardens, wine and hashish that his fighters can partake in after their demanding training regimen.

Sabbah is able to deceive his fighters (mostly through the wine and hashish) into believing that they are engaging in an aspect of heaven, and that they can reach this paradise if they follow his commands (as Sabbah sought to manipulate religious devotion for his own political gain), and stand ready to kill and be killed on behalf of their loyalty to him. And it is here the supreme Ismaili motto is invoked, “Nothing is true, everything is permitted,” which forms a central thematic clause that guides plot sequences used throughout the Assassin's Creed stories.
'Alamut' was originally written in Slovenian in 1938, but Bartol first started to conceive the novel in the early 1930s, when he lived in Paris. It was written as an allegory to Mussolini's fascist state. Circumstances arising from the assassination of Alexander

I of Yugoslavia perpetrated by Croatian and Bulgarian radical nationalists, on the alleged commission of the Italian Fascist government served as a motivation for the novel to be sarcastically dedicated to Benito Mussolini. Beyond the story line of Hassan-ibn Sabbah, the novel focuses on two of his young followers — a beautiful slave girl Halima, who has come to Alamut to join Sabbah's paradise on earth, and young ibn Tahir, Sabbah's most gifted fighter, who upon learning of Sabbah's deception while on an assassination mission, returns to Alamut to assassinate Sabbah himself.

In the 1960's 'Alamut' became a cult favorite throughout Tito's Yugoslavia, and in the 1990s, during the Balkan's War, it was read as an allegory of the region's strife and became a bestseller in Germany, France and Spain. Interestingly, after the attacks of September 11, 2001, it found renewed interest and was translated around the world in more than 19 languages.

The 'Assassin's Creed' collection of novels by Oliver Bowden, is set within the 'Assassin's Creed' video game universe. The books follow various assassins of the war with the Knights Templar, which in the film comes to be known as Abstergo Industries, the modern-day incarnation of the Templar Order. Beginning with the first published novel, 'Renaissance' in 2009 (Assassin's Creed 2 game), what followed hence was: 'Brotherhood' in 2010, 'The Secret Crusade' in 2011, 'Revelations' in 2011, 'Forsaken' in 2012, 'Black Flag' in 2013, 'Unity' in 2014, 'Underworld' in 2015.
Although 'Assassin's Creed' (the game) is set in the near present 21st Century, it's protagonist, Desmond Miles, is able to go back into earlier time periods of world history by experiencing and being immersed into the memories of Assassin's by way of the Animus. Many elements of the book's plot can be found in the first game, and the phrase from the novel under an alternative translation: "nothing is true; everything is permitted" is the guiding principle of the game's Order of Assassins, who are the fictionalized descendants of the Ismaili.
The first 'Assassin's Creed' introduced elements that would remain cornerstones of the rest of the series. The game attempts to create historical versions of Masyaf (the Brotherhood's location), Jerusalem, Acre and Damascus and incorporates a number of documented historical figures into the story. In the production of the first motion picture, set for a December 21 release in North America, will reportedly be a brand new story, with new characters.
According to Michael Fassbender, the star and producer for the film project, "We really want to respect the game[s] and the elements to it. But we also wanted to come up with our own thing. And one thing I’ve sort of learned from doing the franchises like X-Men is that audiences, I think, want to be surprised and to see new elements of what they already know, and different takes on it."
Experientially, for a film audience, it might be tempting to regard the Animus as a time machine through which the protagonist uses to go back centuries and re-trace the steps of an ancestor and their historical memory. The Animus, the machine used to experience ancestors' memories, was redesigned for the film, from a chair to a machine that lifts the user in the air, to allow for a more modern, interactive and dramatic experience. Fassbender also noted the change was done to avoid comparisons to The Matrix.
Remember... “Nothing is true, everything is permitted.”